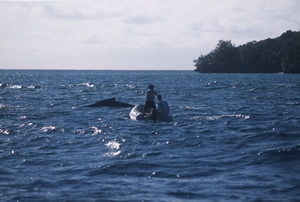 Humpback whales migrate each year to winter breeding grounds near islands and shallow banks in the tropical waters of Oceania (South Pacific) after feeding during summer in waters near the Antarctic. Humpback whales in Oceania were hunted first during the 19th century by "Yankee" style whaling vessels and more intensively during the 20th century by factory ships and modern shore-based operations. The last recorded catches of these whales were by the Kingdom of Tonga, prior to the 1978 Royal decree prohibiting this hunt. Recovery in the abundance of humpback whales in Oceania has been slow and variable. Sightings remain rare along the coast of New Zealand and around several island groups, such as Fiji, where they were once common. Only recently has a primary reason for this slow and variable recovery been revealed. As part of a systematic program of illegal whaling, Soviet factory ships killed almost 13,000 humpback whales in the Antarctic waters directly south of Australia, New Zealand and Oceania during the 1959-60 season. This precipitated a crash in the numbers of humpback whales throughout Oceania and may have resulted in the extinction of some local populations.

The South Pacific Whale Research Consortium (SPWRC) was formed by independent scientists to investigate the status of humpback and other whale species in the region of Oceania, including New Zealand and eastern Australia. Members have been involved in field studies initiated as early as 1991 in New Caledonia, the Kingdom of Tonga, the Cook Islands and French Polynesia, as well as eastern Australia, New Zealand, the Pacific coast of South America, the Ross Sea and the Antarctic Peninsula. Members of the SPWRC met at the University of Auckland from 9-12 April, 2001. The consortium now meets annually to compare and review data collected during each winter season, including individual identification photographs, genetic samples, sighting records and song recordings.

The primary purpose of the consortium is to coordinate and facilitate nonlethal research on large whales in the South Pacific region. Although humpback whales are the focus of much of the work, data are collected on all whales and the consortium serves to promote a better understanding of the biology and behavior of all cetacean, including the many species of dolphins found in this vast region (see Oremus et al. 2007). Documentation of the basic cetacean biodiversity of Oceania is a primary goal of the consortium. The principal field sites currently studied by the consortium and its members include French Polynesia, the Cook Islands, Tonga, New Caledonia, Fiji, Vanuatu, Niue, American Samoa, Samoa, New Zealand, Norfolk Island, and eastern Australia, as well as the Antarctic feeding grounds. Collaborations include researchers along the coast of South America (Colombia and Chile) and in Western Australia.

‹ The New Zealand Subantarctic Stock of Right Whales up Publications ›