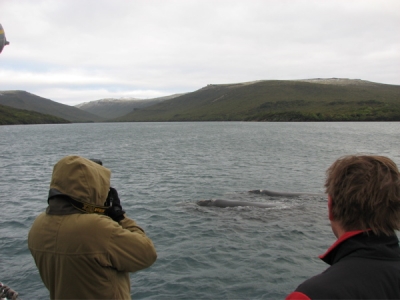 Right whales and other baleen whales were hunted to near extinction during the last two hundred years, virtually eliminating an entire trophic level of primary consumers, particularly in the Southern Hemisphere. Using only sail power and hand-held harpoons, European and ‘Yankee' whaling ships severely depleted northern right, southern right (including the Auckland Island stock), bowhead, gray and, in some regions, sperm whales before the end of the 19th century. Beginning in 1904, modern commercial whaling in the Southern Hemisphere exploited first the humpback and then the blue, fin and sei, killing more than 2,000,000 whales before the international moratorium on commercial whaling took effect in 1986. Reconstructing the history of decline in whale stocks and understanding the former ecological role of the great whales remains one of the great challenges for conservation biology.

Southern right whales were once abundant around the main islands of New Zealand. Based on the known records of catches from whaling ships and shore-based operations, at least 14,757 whales were killed between 1828 and 1967. Remarkably, nearly 10,000 of these were killed in a five-year period from 1837 to 1841. From 1849, less intensive but consistent hunting continued until international protection in 1935. After a respite of 30 years, southern right whales were again hunted illegally by the Soviet Union. Between 1963 and 1966, the Soviets killed about 300 right whales around New Zealand (of a total of more than 3,000 throughout the Southern Hemisphere). As a result of this intensive exploitation, right whales virtually disappeared from the New Zealand mainland for most of the 20th century.

In the early 1990s, the Royal New Zealand Air Force reported a concentration of right whales wintering in Port Ross, along the northeast tip of the subantarctic Auckland Islands (50 degrees south latitude). A series of expeditions during the winters of 1995-98 helped to characterise this remnant population of right whales and establish a baseline for documenting its recovery. As part of her PhD thesis at the University of Auckland, Nathalie Patenaude used individual identification photographs collected during these four winters to estimate that the population numbered about 900 whales. From analysis of skin samples collected with a small biopsy dart, Nathalie also showed that the NZ subantarctic stock was largely isolated from other breeding grounds in the Southern Hemisphere and that diversity of mtDNA was low, consistent with a narrow exploitation ‘bottleneck'. Based on a standard population dynamic model, Nathalie estimated that the pre-exploitation population around New Zealand numbered about 16,000. More recently, Emma Carroll (a masters student at University of Auckland) and Dr. Jennifer Jackson (now with the CCGL) repeated Nathalie's model, allowing for greater uncertainty in the missing records and the whales ‘struck but lost'. Her results suggest that the population might have been much larger, perhaps numbering 30,000 individuals. If so, the current level of recovery is very low and could help explain the very slow return of right whales to the mainland (north and south islands) of New Zealand.

The CCGL is now involved in assessing the rate of recovery of the NZ subantartic stock by repeating the surveys conducted nearly 10 years ago. The second of the three-year surveys was completed in July and August of 2007 with logistic support from Brian Skerry of the National Geographic magazine and in collaboration with researchers from the New England Aquarium (Boston), the Australian Antarctic Division, the University of Auckland and Otago University.

‹ Structure of Populations, Levels of Abundance and Status of Humpbacks (SPLASH) and GeneSPLASH up The South Pacific Whale Research Consortium ›