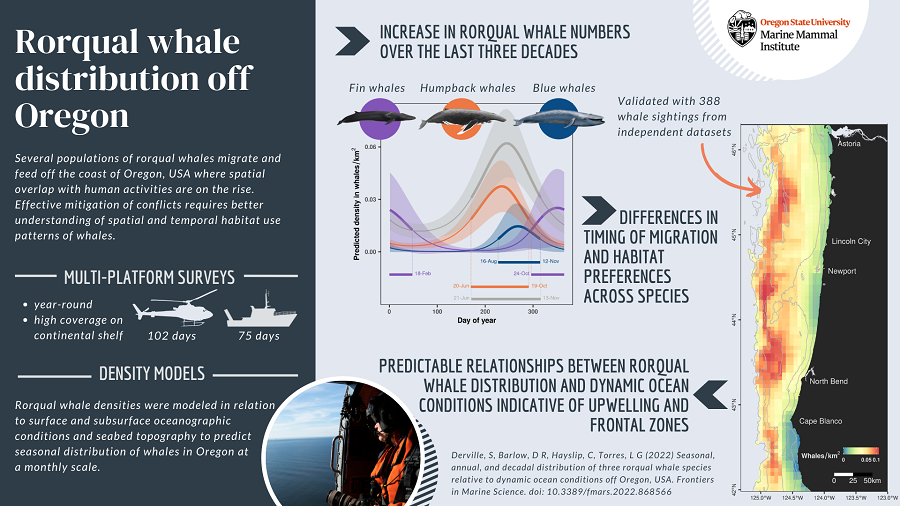 Reports of whale entanglements in fishing gear have steadily increased in US West Coast waters, with Dungeness crab fishing gear implicated in many entanglements. Managers, researchers, fishermen, and the environmental community in Oregon are concerned about this situation because whale entanglements threaten both whale populations and the stability of the crab fishery and coastal communities. The third straight record-breaking year of entanglements occurred in 2016, with deaths of federally protected humpback, gray and blue whales off the coasts of California, Oregon and Washington. The Oregon Whale Entanglement Working Group (OWEWG) formed in 2017, tasked with developing options to reduce entanglement risk. The group members identified that a lack of information and understanding of whale distribution in Oregon waters was a significant knowledge gap of high priority.

Habitat and phenology of rorqual whales off the Oregon coast

Using these rich datasets, we have been able to describe the habitat use and distribution patterns of rorqual whales (blue, fin, and humpback whales) off the Oregon coast. In the first phase of the OPAL project, we analyzed year-round whale occurrence data (2016–2021, 177 survey days, 754 groups observed) with state-of-the-art statistical modeling approaches to describe where we expect whales to be under certain environmental conditions.

We demonstrated (1) an increase in rorqual numbers over the last three decades over the continental shelf off Oregon, (2) differences in timing of migration and habitat preferences across humpback, blue, and fin whales, and (3) predictable relationships between rorqual whale distribution and dynamic ocean conditions indicative of upwelling and frontal zones. This study has been accepted for publication in Frontiers in Marine Science and provides up-to-date predictions of rorqual whale densities at a fine spatio-temporal scale that will facilitate targeted management of human activities in Oregon (Fig. 2). 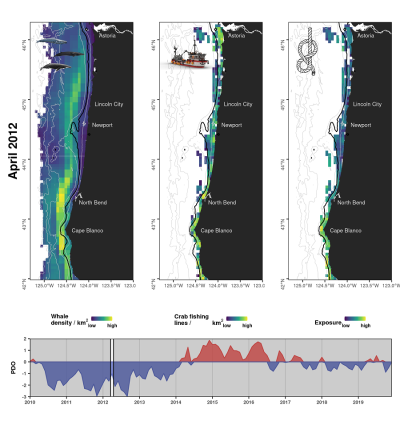 Co-occurrence between whales and fishing activity:

We collaborate with the Oregon Department of Fish and Wildlife to identify patterns of co-occurrence between commercial Dungeness crab fishing gear and rorqual whales, hence assessing the spatio-temporal variations in entanglement risk over the last decade. This second phase of the OPAL project aims to identify the times and places when entanglement risk is the highest, using the year-round predictions of rorqual whale habitat use generated in phase one and maps of fishing effort compiled from logbooks (Fig. 3). With this information, managers can make informed and discrete decisions about fishing effort to maximize effectiveness at protecting whales while also minimizing burdens to fishermen.

Additionally, when aggregations of humpback whales are observed during USCG helicopter surveys, we frequently muster a boat-based field team to head to that location and collect important whale photo-identification data and small tissue biopsy samples for genetic analysis. These data allow us to assign individual whales to Distinct 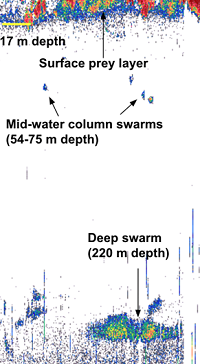 Population Segment (DPS) or stocks, which is critical information that helps managers know more about the risk to certain populations of whales.

Bringing in the prey

Spatial distribution patterns of marine predators are non-random within the ocean’s patchy preyscape, and they are often highly correlated with distribution of their targeted prey. In parallel to our modeling efforts, we are also analyzing the relationships between oceanographic variables, prey availability, and whale distribution to improve the assessment of co-occurrence between whales and anthropogenic activities. 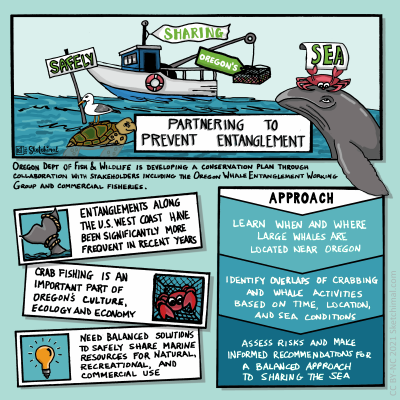 Learning to listen to the sea

Rorquals of the California Current

"Roger that, we are currently enamored"

The room where it happens

The teamwork of conservation science

Oregon Department of Fish and Wildlife

We are conducting surveys for whales aboard USCG helicopters to increase our understanding of whale distribution and habitat use patterns in Oregon waters. We will use these data to assess entanglement risk with fishing gear to inform management decisions.