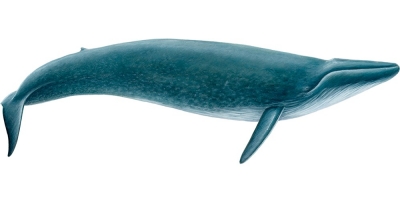 Blue whales are thought to be among the most endangered of the great whales. Scientists estimate that the whaling industry destroyed 97 percent of the world's population. Over 360,000 blue whales were killed in the Antarctic alone. Antarctic blue whales continue to be one of the most depleted populations of whales in the world, with an estimated 2,280 remaining today, or less than 1% of pre-exploitation levels (Branch 2008).

The largest remnant group of blue whales in the world may feed off the California coast during the summer. This group, called the eastern North Pacific population, is estimated to number just under 1,200 individuals (NOAA Stock Assessment Report, 2007). The whales in this population migrate between feeding areas along the west coast of the United States and Canada and breeding and calving grounds off Mexico and Central America. The exact locations of the breeding and calving grounds remain unknown.

The results of our 1994 and 1995 studies led to the first long-term tracks of blue whales (up to 78 days), providing the first migratory route information for this species as well as documenting a link between blue whales feeding off California and those seen in the Eastern Tropical Pacific (ETP, Mate et al. 1999). Dive habit information showed changes in diving and respiratory characteristics depending on time of day, behavior, and water depth.

Satellite-monitored radio tracklines of blue whales tagged off California in 1994 and 1995. Each color represents a different whale.

The link between blue whales feeding off southern California and the ETP was reinforced during subsequent years, when blue whales were tracked from California to the Costa Rica Dome, where they remained for the winter. The Gulf of California was also identified as a wintering ground for this population, after 5 whales tagged in 1999 spent the winter there. Two tags from a study in the fall of 2000 continued to transmit for nine months, allowing the whales’ northward migration into U.S. waters to be recorded. A blue whale tagged in the Gulf of California in the spring of 2002 did not migrate to California during its tracking period (6.5 months), demonstrating that not all whales leave Mexican waters during the summer. The knowledge that not all eastern Pacific blue whales travel into U.S. waters in the summer is critical when interpreting abundance estimates from ship surveys conducted off the California, Oregon, and Washington coast during the summer.

Beginning in 2004, further information has been provided on migration routes and feeding ground movements for this population through our work with the TOPP Program (Tagging of Pacific Pelagics), co-funded by the Sloan, Packard and Gordon Moore Foundations. Each summer, from 2004-2008, we have taken our research vessel, the R/V Pacific Storm, from Oregon to California to study blue, fin, and humpback whales as part of this program. Seventy-four blue whales have been tagged during this time, one of these providing a record tracking period of up to 504 days.

As with previous years’ studies, tagged blue whales showed a great deal of individual variation in their movements, with some remaining in coastal waters, and others traveling as far as 2000 km from shore. While some animals headed south to Mexico, others moved north to Oregon and British Columbia. One animal spent almost 2 months in the Gulf of Alaska, confirming blue whale presence in this area in the fall. Annual variation in both feeding ground movements and migratory destinations was also evident, likely due to changes in oceanographic conditions from year to year. For example, blue whales tagged in 2005 were distributed farther offshore than those tagged in 2004, likely as a result of decreased productivity in the nearshore waters from El Nino-like conditions off California and Oregon in the spring and summer of 2005.

Similarities in blue whale movements from year to year were also evident, particularly the consistent use of areas off the west coast of Baja California and the Channel Islands in southern California, demonstrating that persistent oceanographic features are an important element in their seasonal distribution (Fiedler et al. 1998, Etnoyer et al. 2004, Etnoyer et al. 2006).

For real-time tracking information on tagged blue whales, check out the TOPP website.

In January 2004, five tags were placed on blue whales in the fjords of southern Chile, providing the first tracking data on a Southern Hemisphere blue whale population. The whales stayed in the feeding areas longer than was expected, mainly hugging the nearshore areas, with occasional forays out of the fjords into the open ocean. Two of the whales went north and offshore to the Nazca Ridge (approximately 500 miles from shore, 25 degrees south latitude), where colliding tectonic plates are building up an underwater ridge. The upwelling is excellent in this area, and where there’s upwelling, there are usually good food resources. It may be that the Nazca Ridge is a winter feeding area for this population.

For more details about our blue whale research, check out:

Movements of North Pacific blue whales during the feeding season off southern California and their southern fall migration.

Abstract: The satellite-acquired locations of 10 blue whales (Balaenoptera musculus) tagged off southern California with Argos radio tags were used to identify: 1) their movements during the late summer feeding season; 2) the routes and rate of travel for individuals on their southern fall migration; and 3) a possible winter calving/breeding area. Whales were tracked from 5.1 to 78.1 d and from 393 to 8,668 km. While in the Southern California Bight, most of the locations for individual whales were either clumped or zigzagged in pattern, suggesting feeding or foraging (searching for prey). Average speeds ranged from 2.4 to 7.2 km/h. One whale moved north to Cape Mendocino, and four migrated south along the Baja California, Mexico, coast, two passing south of Cabo San Lucas on the same day. One of the latter whales traveled an additional 2,959 km south in 30.5 d to within 450 km of the Costa Rican Dome (CRD), an upwelling feature. The timing of this migration suggests the CRD may be a calving/breeding area for North Pacific blue whales. Although blue whales have previously been sighted in the Eastern Tropical Pacific (ETP), this is the first evidence that whales from the feeding aggregation off California range that far south. The productivity of the CRD may allow blue whales to feed during their winter calving/breeding season, unlike gray whales (Eschrichtius robustus) and humpbacks (Megaptera novaeangliae) which fast.


Blue whale habitat and prey in the California Channel Islands

Abstract: Whale Habitat and Prey Studies were conducted off southern California during August 1995 (WHAPS95) and July 1996 (WHAPS96) to (1) study the distribution and activities of blue whales and other large whales, (2) survey the distribution of prey organisms (krill), and (3) measure physical and biological habitat variables that influence the distribution of whales and prey. A total of 1307 cetacean sightings included 460 blue whale, 78 fin whale and 101 humpback whale sightings. Most blue whales were found in cold, well-mixed and productive water that had upwelled along the coast north of Point Conception and then advected south. They were aggregated in this water near San Miguel and Santa Rosa Islands, where they fed on dense, subsurface layers of euphausiids both on the shelf and extending off the shelf edge. Two species of euphausiids were consumed by blue whales, Thysanoessa spinifera and Euphausia pacifica, with evidence of preference for the former, a larger and more coastal species. These krill patches on the Channel Island feeding grounds are a resource exploited during summer-fall by the world’s largest stock of blue whales.

Abstract: The Baja California to Bering Sea (B2B) Marine Conservation Initiative seeks to establish a network of Marine Protected Areas within the Exclusive Economic Zones of the NAFTA countries - Canada, Mexico, and the United States. This network is designed to capture ecologically significant habitat for marine species of common conservation concern and pelagic regions of high productivity, with due consideration for the inter-annual sea surface temperature fluctuations of the El Niño Southern Oscillation (ENSO). Here, we present analytical methods that define pelagic habitat based upon the density of steep temperature gradients, or fronts, and we quantify their spatial and temporal persistence over a single ENSO cycle (1996-1999) to benefit marine conservation and marine management strategies. We find that less than 1% of the Northeast Pacific ocean exhibits a persistent (> 8 mo/yr) concentration of temperature fronts (>0.2km/km2) within and between years. The Baja California Frontal System (BCFS) is the largest concentration found within the multinational federal waters, between 0 and 300 km east of Baja California Sur. The BCFS appears more active under La Niña conditions, while the next largest persistent concentration, North Pacific Transition Zone, appears more active under El Niño conditions. We demonstrate habitat functions associated with the BCFS for blue whales (Balaenoptera musculus), swordfish (Xiphias gladius), and striped marlin (Tetrapturus audax). We recommend management and protection for this pelagic “hotspot” to the Mexican government and the tri-national Commission for Environmental Cooperation.

Abstract: Sea-surface temperature (SST) fronts are integral to pelagic ecology in the North Pacific Ocean, so it is necessary to understand their character and distribution, and the way these features influence the behavior of endangered and highly migratory species. Here, telemetry data from sixteen satellite-tagged blue whales (Balaenoptera musculus) and sea turtles (Caretta caretta, Chelonia mydas, and Lepidochelys olivacea) are employed to characterize ‘biologically relevant’ SST fronts off Baja California Sur. High residence times are used to identify presumed foraging areas, and SST gradients are calculated across advanced very high resolution radiometer (AVHRR) images of these regions. The resulting values are compared to classic definitions of SST fronts in the oceanographic literature. We find subtle changes in surface temperature (between 0.01 and 0.10 1C/km) across the foraging trajectories, near the lowest end of the oceanographic scale (between 0.03 and 0.3 1C/km), suggesting that edge-detection algorithms using gradient thresholds40.10 1C/km may overlook pelagic habitats in tropical waters. We use this information to sensitize our edge-detection algorithm, and to identify persistent concentrations of subtle SST fronts in the Northeast Pacific Ocean between 2002 and 2004. The lower-gradient threshold increases the number of fronts detected, revealing more potential habitats in different places than we find with a higher-gradient threshold. This is the expected result, but it confirms that pelagic habitat can be overlooked, and that the temperature gradient parameter is an important one.