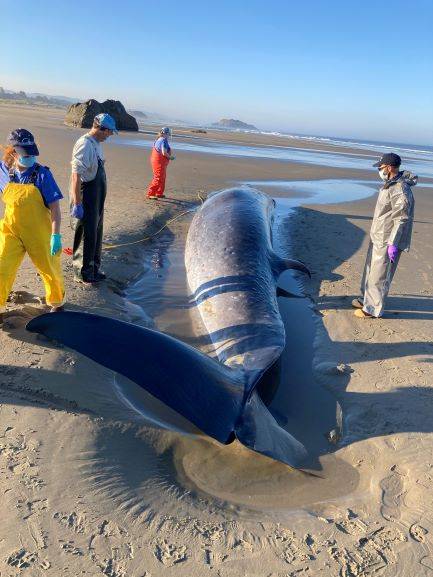 At approximately 1:00 PM on Saturday, September 5, a live 39 foot sei whale (Balaenoptera borealis) was reported to be struggling in shallow water on the beach amongst large rocks at Face Rock in Bandon, Oregon. It became high and dry with the outgoing tide under a bright, warm sun. Supportive care was provided by personnel with the NOAA Office of Law Enforcement, the Oregon Department of Parks and Recreation (OPRD), Oregon State Police (OSP), and several local and regional volunteers (who provided crowd control and cooling of the whale’s body using buckets of water poured over wet towels and blankets). Members of the OSU Marine Mammal Institute arrived on scene at 7:00 PM and began a physical evaluation of the whale (in phone conference with personnel with Sealife Response, Rehabilitation, and Research (SR3) while continuing supportive care. At 9:00 PM the whale passed away - it was no longer breathing, had no response to touch or manipulation and there were no eye reflexes.

A necropsy was commenced early the next morning involving personnel from the Marine Mammal Institute, SR3, and World Vets, with support provided by NOAA, OPRD, OSP, and volunteers. Tissue samples collected from organs throughout the body were submitted the Oregon Veterinary Diagnostic Laboratory for histopathology. Results indicated that widespread open wounds on the body, likely caused by cookiecutter shark (Isistius brasiliensis) bites, led to bacterial colonization, triggering disseminated intravascular coagulation (DIC), the formation of blood clots throughout the body, and ultimately the whale's death. This was the first stranding of a sei whale along the Oregon coast in recent history, and only the fourth along the entire west coast of the U.S. since 1950.