Where are whales in Oregon waters?

Reports of whale entanglements in fishing gear have steadily increased in US West Coast waters, with Dungeness crab fishing gear implicated in many entanglements. The third straight record-breaking year occurred in 2016, with deaths of federally protected humpback, gray, and blue whales off the coasts of California, Oregon, and Washington. 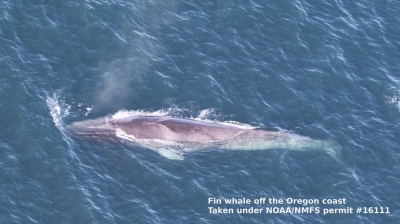 In response, managers, researchers, fishermen, and the environmental community in Oregon are concerned about this situation because whale entanglements threaten both whale populations and the stability of the crab fishery and coastal communities. Hence, the Oregon Whale Entanglement Working Group (OWEWG) formed in 2017, tasked with developing options to reduce entanglement risk. The group members identified that a lack of information and understanding of whale distribution in Oregon waters was a significant knowledge gap of high priority. We just don’t know enough about where whales hang-out in Oregon waters to help protect them. 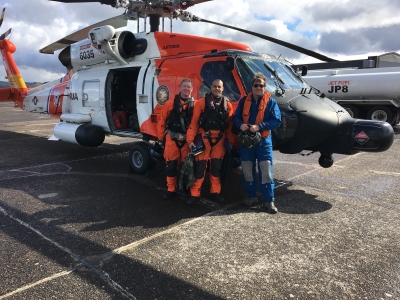 To fill this knowledge gap we are teaming up with the United States Coast Guard helicopter divisions in Oregon to conduct repeat surveys along the Oregon coast four times a month for two years. We are also asking ocean users of all types (i.e., fishermen, scientists, USCG, tug boat captains) to become citizen scientists and collect opportunistic whale sightings data using the mobile app Whale mAPP. Additionally, we participate in multiple interdisciplinary vessel based research cruises off the Oregon coast to conduct marine mammal surveys and collect data on whale sightings. With these rich datasets, we will soon be able to describe the habitat use and distribution patterns of whales off the Oregon coast. We will build predictive distribution models to describe where we expect whales to be under certain environmental conditions. We will then compare these distribution maps to information of where fishermen deploy their gear in order to determine areas of high and low risk of whale entanglement. With this information, managers can then make informed and discrete decisions about fishing effort to maximize effectiveness at protecting whales while also minimizing burdens to fishermen.

We are conducting surveys for whales aboard USCG helicopters to increase our understanding of whale distribution and habitat use patterns in Oregon waters. We will use these data to assess entanglement risk with fishing gear to inform management decisions.