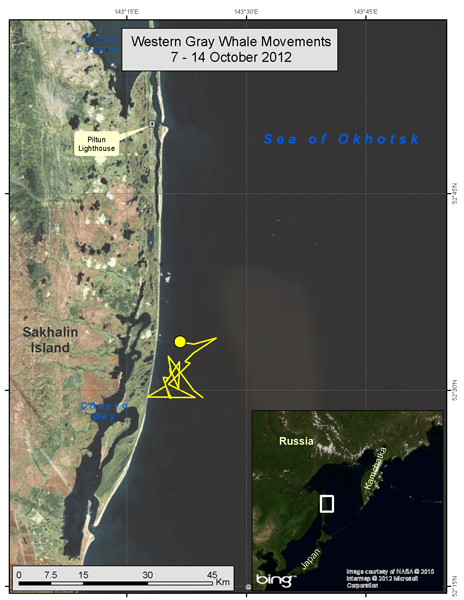 The last map on the website was in fact the last one for Varvara's tag, which ended operations on 12 October, 408 days after tagging, which is consistent with the original tag-life estimate. Varvara provided us some truly amazing data and insights that will be written up for peer-reviewed publications. Thanks for your enthusiastic interest and support of this project.

To learn more about the life history of the tagged whales, we asked our colleagues at the Kamchatka Branch of the Pacific Institute of Geography (KBPIG) and at the National Marine Fisheries Service (NMFS), who have been studying gray whales off Sakhalin Island since 1995.  Kol, a male, was first sighted off Sakhalin as a calf in 2004, meaning that he is approximately seven and a half years of age.  He has been observed off Sakhalin almost every summer since he was a calf.  Agent is a six and a half year old female who has been seen frequently off Sakhalin since she was first sighted as a calf in 2005

Varvara, an eight and a half year old female, has been seen intermittently off Sakhalin since she was first sighted as a calf in 2003.  Varvara has a reputation for being particularly curious and playful during small boat encounters!  Blaze was accompanied by a calf when first identified off Sakhalin in 1995, making her at least 26 years of age.  She has been sighted in almost all subsequent years and has been observed with five calves during this period.  We are no longer hearing from the tag on Blaze, but it was not well attached and has probably fallen off.

Svetlana leaves an impression on all who encounter her because of her calm demeanor, her enormous size (potentially the biggest of the Sakhalin whales), and a large scar on her back (most likely the result of a previous vessel collision).  Svetlana was an adult when first identified in 1997 and has been sighted off Sakhalin in virtually every year since.  Svetlana has been observed with four calves over the years, and we know that she is at least 23 years of age, although we suspect she is quite a few years older.  Bud, so-called because she is also especially tolerant of the research vessel, has other characteristics in common with Svetlana.  Bud is also a reproductive female, was first identified off Sakhalin as an adult in 1997, and has been sighted there in most of the following years.  Based on when she was first observed with a calf, we know that Bud is at least 19 years of age, but she may indeed be older.  Bud has had at least four calves, including one that she weaned earlier in the 2011 tagging season.  Bud’s calf from 2006 was unfortunately fatally entrapped in a set net off Japan in early 2007. To date, Bud represents the only known connection between Sakhalin and the historical western gray whale migratory corridor.

During our tagging efforts this summer, we saw Flex (the whale tagged in 2010) on several occasions.  He appeared to be in good body condition and, while scarred, the tag area has healed.

Anyone making reference to these data needs to acknowledge the source of the data by using the following text: "This research was conducted by A.N. Severtsov Institute of Ecology and Evolution of the Russian Academy of Sciences (IEE RAS) and Oregon State University Marine Mammal Institute in collaboration with the U.S. National Marine Fisheries Service, Kronotsky State Nature Biosphere Reserve and the Kamchatka Branch of the Pacific Institute of Geography. The research was contracted through the International Whaling Commission (IWC) and International Union for Conservation of Nature (IUCN) with funding from Exxon Neftegas Ltd. and Sakhalin Energy Investment Company Ltd.

None of the material here should be construed as permission to publish this material without specific permission from the Principal Investigators (Bruce Mate and Valentin Ilyashenko).