Oregon's Summer Residents (or Are They?) 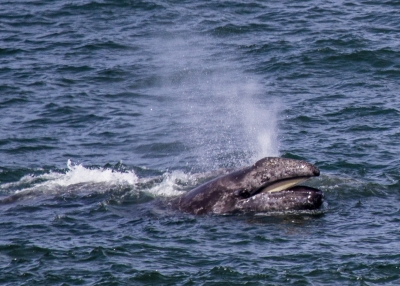 Gray whale viewing off the Oregon coast has been fantastic this fall, and twice I’ve been able to regale visiting family with close-up views of flukes and flippers without even leaving shore. My relatives were thrilled to watch gray whales feeding among the rocks off Yaquina Head and look down on them in the kelp at Cape Foulweather. My cousin asked me if these whales live here year-round. My answer: “No, not usually, but sometimes!”

The gray whales we see on the Oregon coast in the summer are part of the Pacific Coast Feeding Group (PCFG), about 200 gray whales that don’t follow the rest of the Eastern Pacific gray whales to the Arctic. Instead, this small group spends its summer and fall feeding in the Pacific Northwest (PNW), from northern California to Southeast Alaska. They feed in very shallow water along our coast, eating mysid shrimp, amphipods, and even ghost shrimp in tidal flats, sucking up these prey items and straining out the water and bottom sediment through their coarse baleen plates. In the winter, they migrate to calving and breeding lagoons along the west coast of Baja California, Mexico. The nearshore habit of these whales exposes them to things that could put them at risk, such as fishing gear, vessel traffic, marine energy development, naval activities, and even cultural hunting by the Native American Makah Tribe on Washington’s Olympic Peninsula.

In 2009, the Whale Telemetry Group was funded by the International Whaling Commission and two Russian oil companies (Sakhalin Energy and Exxon Neftgas Limited) to tag PCFG gray whales to better understand their summer/fall distribution and movements. Our successful study would demonstrate that our tagging technology was feasible for our “abundant” gray whales before tagging critically endangered Western gray whales found in the Sea of Okhotsk, Russia. Tagging of PCFG gray whales continued in 2012 and 2013 with funding from the US Navy to determine gray whale use of Navy training ranges along the West Coast. 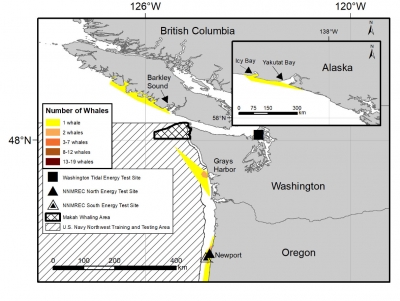 In all, we tagged 35 PCFG gray whales with satellite tags, 12 off central Oregon and 23 off northern California (near Crescent City). Tracking periods ranged from 3 to 383 days (the average was 119 days), with total travel distances ranging from 42 to 7,222 miles. Eighteen whales migrated to Mexico during their tracking periods, all of them going to Ojo de Liebre Lagoon, the northernmost breeding and calving lagoon for gray whales on the west coast of Baja California.

One particularly notable whale was a male tagged off Newport, Oregon, on 2 September 2009. This whale (#831) was tracked for more than a year, during which it, amazingly, never left the PNW. This was the first documentation of a gray whale not migrating south to Mexico for the winter. It remained off the northern California coast all fall and winter, from September to April. The animal spent the spring and early summer moving between the central and southern Oregon coast, finally settling off Cape Blanco, southern Oregon, for 66 days until the end of its track on 21 September 2010, 383 days after tagging. So back to my cousin’s question, “Do they stay here year-round?” Most don’t, but some do… sort of. It depends on what you mean by “here.” Whale #831 definitely stayed in the PNW year-round, but it certainly didn’t stay put in one small area during that time. 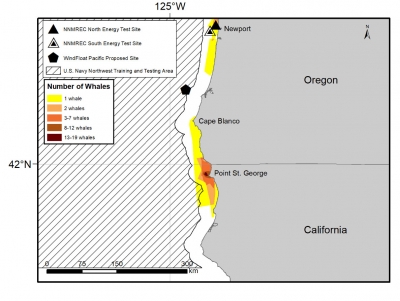 To get a better handle on where gray whales spend time in the PNW during their summer/fall feeding season, we determined areas of intensive use by individuals called core areas. When core areas for all whales are mapped together they show that the areas of highest use (or “hot spots”) for gray whales are the southern Washington coast, the central Oregon coast, and especially the northern California coast, where core areas for 15 whales overlapped (see figures).

The location of a hot spot on the northern California coast is not surprising, as many of the whales were tagged near there, but it also appears to be a “staging area” where whales continue to feed until they migrate south. Twelve tags lasted long enough to include tracks of migrating whales returning north from Mexico with arrival dates ranging from 21 February (while some whales were still migrating south) to 18 April. Some of these whales headed to more northerly areas (Alaska, British Columbia, and Washington) earlier in the feeding season, primarily in spring and summer, and then shifted to the south in fall and early winter. Three gray whales spent extended periods of time in the spring in Southeast Alaska, around Icy and Yakutat Bays, identifying these northern areas as important feeding habitat for PCFG gray whales.

Whale locations also provide us information about the whales’ behavior. Linear tracks are categorized as “transiting” (like migration or moving between feeding areas) and non-linear or meandering tracks as “localized” (suggestive of feeding behavior). Twenty-six whales exhibited patches of localized behavior, the durations of which allowed us to determine residence times in various PNW areas. The area off Point St. George, northern California, had the longest residence times, up to 142 days at a stretch, followed by Cape Blanco (66 days) and Icy Bay, Alaska (55 days). Many of these 26 whales had multiple patches of localized locations, in multiple areas in the PNW, demonstrating considerable movement between areas, in addition to extended residencies.

Eight PCFG gray whales spent time in the Makah Whaling Area off the northwest corner of the Olympic Peninsula, Washington (see figures). Whales were found in the area February through May and were exhibiting localized behavior, which demonstrated earlier feeding in the year than previously believed. This has significant implications to the mitigation efforts employed by the Tribe to minimize impacts of their hunting on PCFG gray whales.

Ten PCFG gray whales spent time in the US Navy’s Northwest Training and Testing Area (NWTT), which extends along the coasts of Northern California, Oregon, and Washington, out to approximately 290 miles offshore (see figures). Gray whale locations occurred in the NWTT from January through May, August, November, and December, with localized behavior in all but February and November. The majority of tagged whale locations are fewer than 6 miles from shore; the potential exposure of gray whales to Navy activities is thus likely quite small, as the eastern boundary of the NWTT is 14 miles from shore along much of its length. The exception to this would be in the area of Pacific Beach, Washington, where the boundary of the training range comes all the way to shore, or north of Pacific Beach where the boundary begins 3.5 miles from shore.

Gray whale hot spots off southern Washington and central Oregon may also put whales at risk from other anthropogenic uses of the coastal ocean. Both of these areas contain large commercial fishing ports, and the Columbia River at the Oregon–Washington border represents the busiest river mouth along the west coast for commercial shipping. The central Oregon coast is also experiencing interest in the development of marine renewal energy, with the Northwest National Marine Renewable Energy Center (NNMREC) test site facilities off Newport. Our tracking results are important in determining or mitigating the effects of these potential stressors to gray whales, aiding in the appropriate siting of coastal development and helping efforts to reduce risk of ship strikes or fishing gear entanglement.

In the end, our tracking results not only help me answer my cousin’s question (albeit with a fairly convoluted answer), they also provide valuable information to conservation and management efforts for PCFG gray whales in the Pacific Northwest. The results of this study have been published in the Journal of Wildlife Management.