Eastern gray whales migrate more than 6000 kilometers (3600 miles) along the pacific coast of North America, from their feeding grounds in Alaska to their breeding grounds in Baja California. Gray whales begin the southbound trip late in fall, arriving in Baja between December and February. Pregnant females migrate first, followed by non-pregnant females, adult males and immature individuals. On the return trip north, adults leave first and mothers with newborn calves are the last to leave the breeding areas. These differences in migration timing between the reproductive classes are reflected in the migration along the Oregon coast. Previous studies indicate that the southward migration through Oregon lasts about two months (Herzing and Mate 1984). However, 90% of the whales migrated past Yaquina Head between December 19 and January 23. The northward migration through Oregon is divided in two phases. Phase A, which comprises adults without calves, begins during the last week of February with a peak in mid-March. Phase B of the northward migration includes primarily females with calves, and they start passing by Yaquina Head in late April with a peak in early May (Herzing and Mate 1984).  Location of the migration corridor has been observed to vary between seasons and between years (Green et al. 1995). Previous observations have also shown that gray whales migrate farther offshore during the southbound migration compared to the northbound migration (Herzing and Mate 1984; Green et al. 1995).

Recent plans to develop wave energy farms off the Oregon coast have raised concerns about the potential effects on the marine environment. Among these concerns are the potential effects of the wave farms on gray whales migrating along the Oregon coast. To address that question, the Oregon State University Marine Mammal Institute is conducting a study on the migration patterns of gray whales off Yaquina Head. This study is funded by the Oregon Wave Energy Trust and supported by the Bureau of Land Management, Yaquina Head Outstanding Natural Area.

The objective of the study is to obtain up to date information on the areas used by gray whales when they pass by Yaquina Head. In particular, we will estimate distance to shore and water depth preferences of the migrating whales. We will also obtain detailed behavioral observations by tracking the whales. Data gathered before the wave energy structures are deployed, during the 2007-2008 migration, will serve as a baseline for comparison once the wave energy farms are deployed

Data for our study are collected from an observation station located next to the Yaquina Head lighthouse. We track the whales with the aid of binoculars and a theodolite. A computer converts the angles measured with the theodolite into distances and then into geographic location. We use the software package “Pythagoras” (Gailey and Ortega-Ortiz 2002) which allows real time visualization of the tracking data.

For more information on wave energy development in the Pacific Northwest, click here. 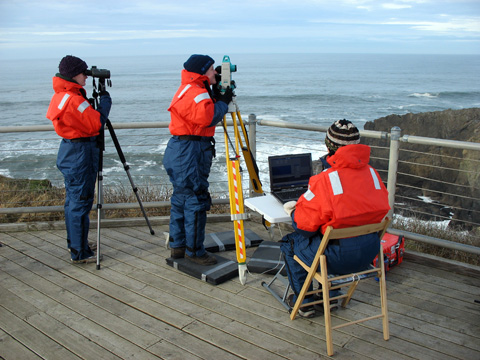 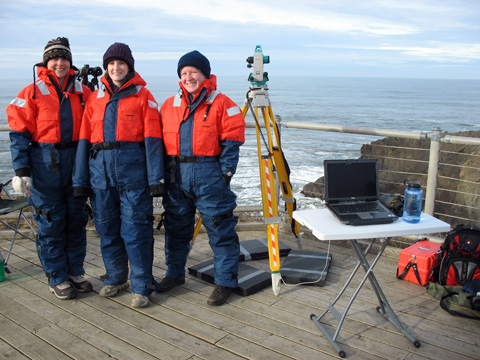 Gailey, G. and J. G. Ortega-Ortiz. 2002. A note on a computer-based system for theodolite tracking of cetaceans. Journal of Cetacean Research and Management 4:213–218.

‹ Gray Whale up Oregon's Summer Residents (or Are They?) ›