Professor Scott Baker, Associate Director of the Marine Mammal Institute, was in South Africa this month (May 2013) as a contributing lecturer at a workshop on Advances in Conservation Genetics. The workshop was sponsored by the American Genetic Association and hosted by University of Pretoria and the Southern African Wildlife College.

During the week-long workshop, students and faculty were invited to participate in the live capture of a male rhinoceros and a bull elephant by veterinarians from Kruger National Park. The rhino was captured for transport to another reserve and to harmlessly remove the horns, which are valued at up to $60,000/kilogram for use in Chinese traditional medicine. The international trade in rhino horn is illegal, but its extraordinarily high value has resulted in an epidemic of poaching and smuggling. By removing the horn, the rhino is at much less risk of a tragic death at the hands of these well-armed and dangerous poachers. A sample of the horn was collected for DNA "profiling" by the Veterinary Genetics Laboratory at the University of Pretoria. By establishing a database of DNA profiles from all the rhinos in the park, scientists in South Africa can help track illegal trade and provide investigators with evidence to convict poachers and smugglers.

During his visit, Prof. Baker met with members of the Veterinary Genetics Laboratory and shared his experience with using DNA methods to track illegal hunting and trade in whale and dolphin meat. 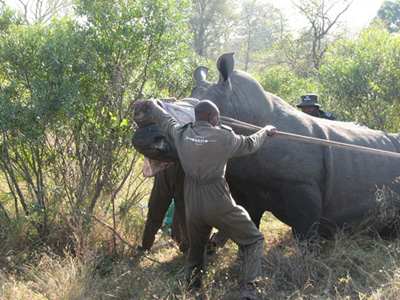 After harmlessly removing the horns, staff from Kruger National Park quickly moved the rhino into a waiting crate as the tranquilizer wears off. 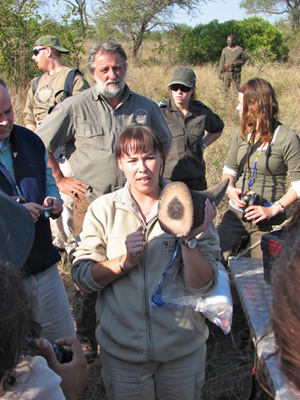 A member of the Veterinary Genetics Laboratory at the University of Pretoria displays the horn from the rhino and explains the extraction of DNA for identification and tracking. 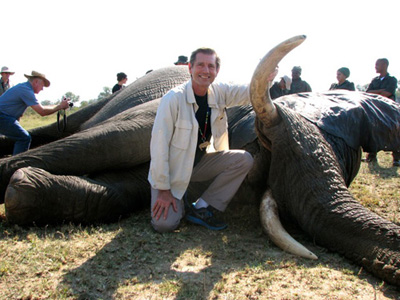 Scott Baker with a bull elephant tranquilized for a health assessment by veterinarians from Kruger National Park, South Africa.