A Pattern of Dolphins in the Society Islands of French Polynesia

Renee Albertson, PhD student with the Marine Mammal Institute at Oregon State University, will be undertaking a month-long field project in the Society Islands (Raiatea, Tahaa, Huahine, Bora Bora, Maupiti) in French Polynesia beginning September 30th 2011 in collaboration with Dr. Michael Poole of the Marine Mammal Research Program of Moorea, French Polynesia and The South Pacific Whale Research Consortium. This will be the first survey of dolphins in the Leeward Islands of this archipelago since 2004. The primary purpose of the project is to obtain information on population structure, habitat use and movements of dolphins by collecting skin biopsy samples and photo-identification records. These will contribute to long-term, ongoing genetic and demographic studies of residency patterns and social organization among small cetaceans throughout French Polynesia.

Our project is based on the island of Raiatea in the Leeward Islands.  We chose this island as our home base because of its central location to the other islands.  In good weather we will have access to Bora Bora to the northwest, Taha'a to the north and Huahine to the southwest.

Our project is based on the island of Raiatea in the Leeward Islands.  We chose this island as our home base because of its central location to the other islands.  In good weather we will have access to Bora Bora to the northwest, Taha'a to the north and Huahine to the southwest.

Bad weather and boat issues have restricted us to inshore areas around Raiatea.  We observed a small group of spinner dolphins just outside the Northwest pass of Raiatea.  Four of the six individuals had distinctively marked dorsal fins. We use these distinct marks to identify individuals. 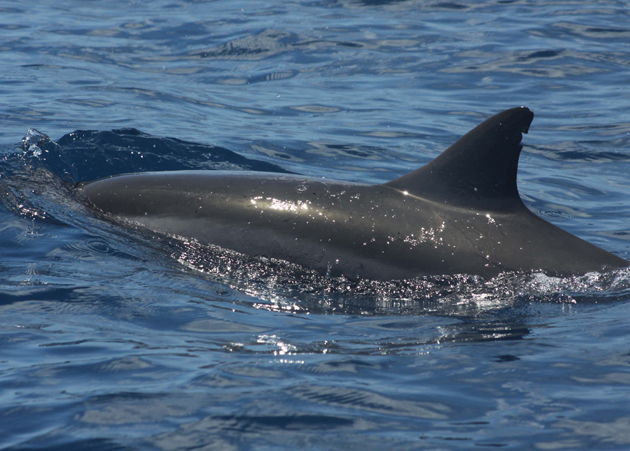 After a very rainy morning, some afternoon sun breaks and light winds allowed us a short survey on the east (windward) side of Raiatea.   A group of spinner dolphins (about 30 individuals) were heading out of one of the southern passes.  We were able to collect a biopsy sample for our genetics work and photo identify several individuals. 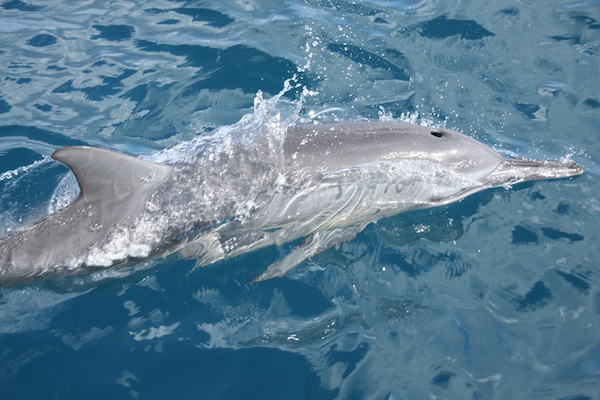 A spinner dolphin surfacing near the boat.  Photo by Pamela Carzon.

The winds were coming out of the Southeast, so allowed us early in the day to go around the north end of Tahaa and the middle of the channel between Tahaa and Bora Bora.  Although we encountered no dolphins, we observed 3 pairs of humpback whales.  The humpbacks are only in French Polynesia during the austral winter months for the breeding and calving season. 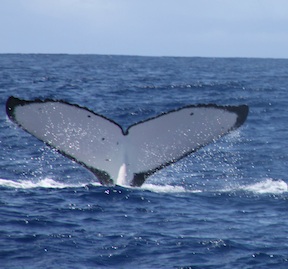 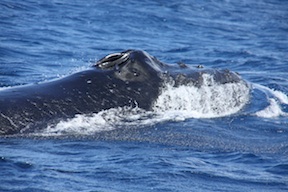 Photo left: The underside of the humpback whale fluke is used to identify individuals, similar to a fingerprint.  Both photos are by Pamela Carzon

Today, despite boat problems and high winds, we were able to find a group of rough-toothed dolphins together with bottlenose dolphins not far offshore on the east side of Raiatea.  These species are often seen together in this area, and are of great interest for our project here.  There has not been a lot of work on bottlenose dolphins here in French Polynesia, so the biopsy samples we collected here will be interesting to compare to the bottlenose dolphin samples we obtained in the Tuamotu archipelago in 2010. Many animals had distinct dorsal fins, so we were able to photo identify several individuals from both species. 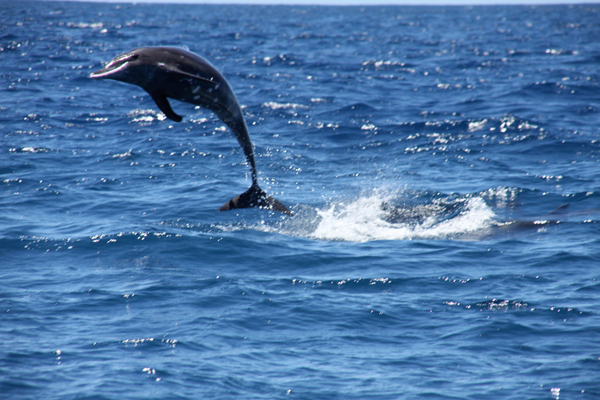 A rough-toothed dolphin leaping out of the water. The white scarring on the underside is from cookie cutter shark bites. Photo by Pamela Carzon. 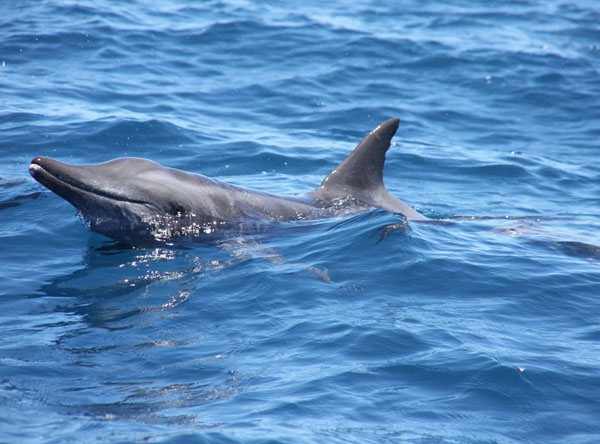 A rough-toothed dolphin surfacing, showing the unique narrow melon of this species.  Photo by Pamela Carzon

Today we circumnavigated Raiatea at about 1,000 meter depth contour.  We collected a biopsy of a humpback whale in the east side of the island. In addition, we explored the only Fishing Aggregated Device (FAD) located 10 km west of Raiatea.  Rough-toothed dolphins have been observed at these devices around Moorea in the Windward Islands, but we did not observe any here.  We will continue to check back at the FAD when weather conditions allow. We did observe spinner dolphins resting in the bay, and were able to collect biopsy samples and several photo IDs. 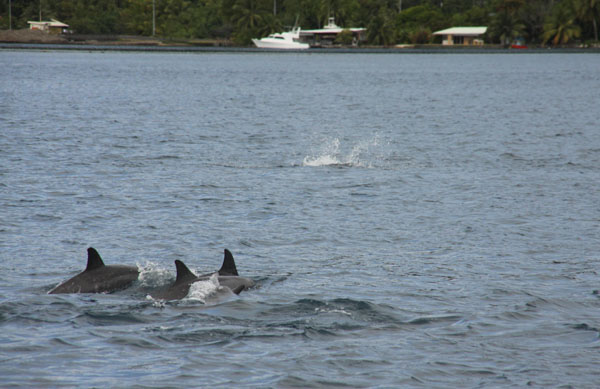 Today we circumnavigated Bora Bora. Despite favorable conditions and a large survey area we did not observe any small odontocetes. However, we did collect biopsy samples and photo IDs of 2 humpback whales, the mother of a cow/calf pair, and another adult that accompanied them, we call "the escort", about 9 km from shore. 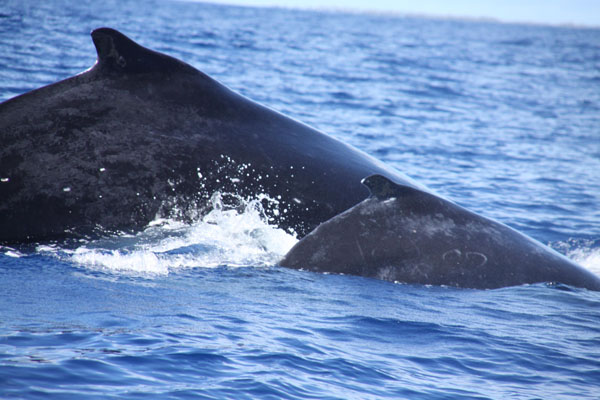 Today we had our second rough-toothed dolphin encounter.  This encounter was outside the pass on the west coast of Raiatea and there were no other species present.  It was a group of about 50 animals, spread out over an area 2 km by 3 km.  This appears to be a typical feeding strategy of this species.  We were able to obtain biopsies and photo IDs. Several of these same dolphins have been previously observed (identified by Pamela Carzon using photo identification methods) around the island of Huahine, 35 km to the east. 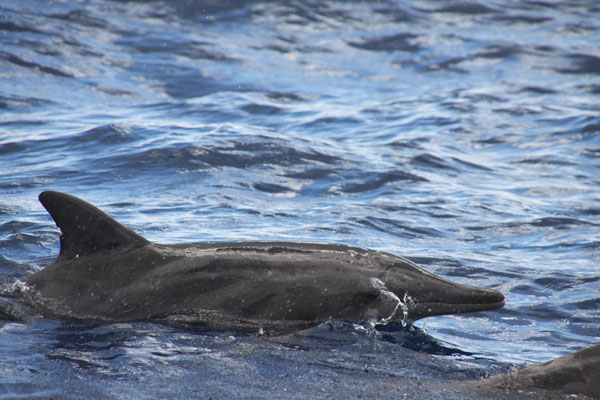 Photo by Pamela Carzon
A rough-toothed dolphin surfacing.  This photo illustrates the narrow melon unique to this species.  This individual has a distinct notch in the dorsal fin.  These notches are used to identify individuals. 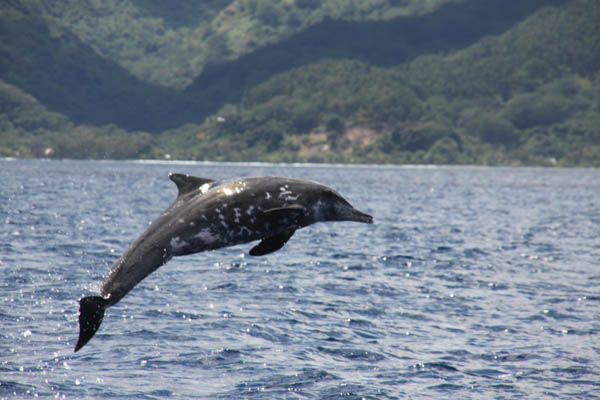 A rough-toothed dolphin leaping.  The coloration patterns on the underside of the animal are common in this species.

October 11, 2011
We were limited to the west side today because of the wind.  We went into the passes on this side to check for spinner dolphins.  These dolphins generally rest during the day inside passes and feed out in the open ocean at night.  We were able to obtain biopsy samples and photo Ids of several individuals. 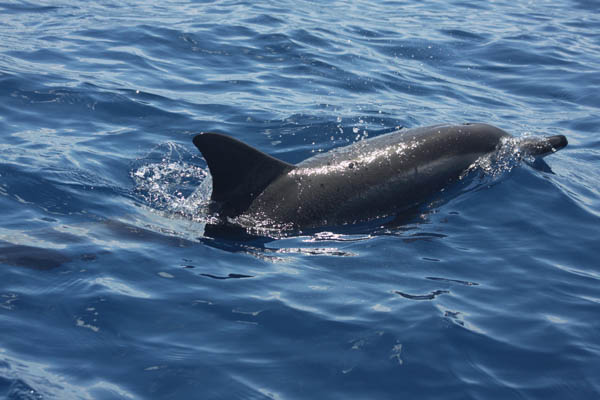 A close up of a spinner dolphin surfacing illustrating the pronounced melon.

We were able to go out only for about 2 hours in the early morning before a storm system moved in.  It is bringing lots of wind and rain so our boat is dockside while we wait it out.  One interesting aspect that is beginning to become more evident is the possibility of a rough-toothed dolphin/bottlenose dolphin hybrid.  These two species have been observed together on several occasions around the island of Huahine, and we have observed them in a mixed group this month on the east side of Raiatea (see October 5th update). The photos below represent two different animals that may possibly be hybrids. We observed Hybrid 2 on October 5th. This animal has a very distinct dorsal fin.  We will do our best to biopsy these or similar animals if we encounter them again. 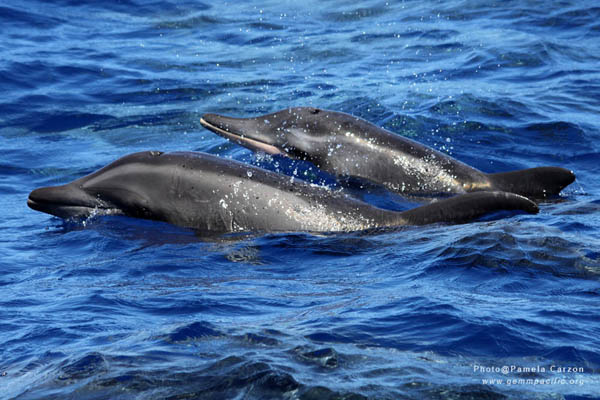 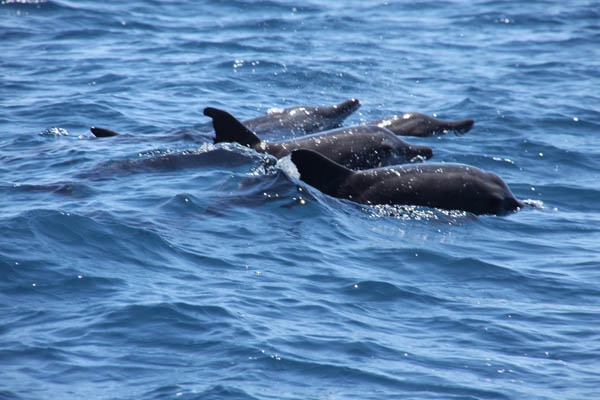 The two animals in the back are rough-toothed dolphins.  The animal in the middle is the possible hybrid.

Due to high winds and rain we have not been able to go out for 3 days.  Comparing the Steno bredanensis photos with the catalog from Huahine showed 6 matches (individuals we identified on October 5th that had been identified previously in Huahine.)  We biopsied one of these individuals on Oct 5th.  In addition, we identified 7 new individuals.

The third photo was taken in Huahine in 2010.  We biopsied this individual on October 5, 2011. This appears to be an older individual, evident from the large amount of white around the mouth.

Today the strong winds restricted us to a small lee on the west side of Raiatea.  Luckily, this is where the dolphins were.  We first spotted them about 3km offshore.  We observed a mixed group of rough-toothed  and bottlenose dolphins.  This is our second encounter with these two species, and our third rough-toothed dolphin encounter.  We were able to biopsy a few new individuals despite very rough Beaufort 4 conditions, and observed at least one individual we biopsied on October 5th. We photo identified several individuals, many of which we had observed previously on our October 5th encounter and in Huahine earlier this year and in 2010.

Photo by Jim Sumich
This individual with the malformed dorsal fin, we have nicknamed "Chopper", we biopsied on October 5th.  The photo posted previously of Chopper (with a circle around the dorsal fin) shows it surfacing next to the same individual in the same relative position as today's photo.  The previous photo was taken in Huahine in 2010. 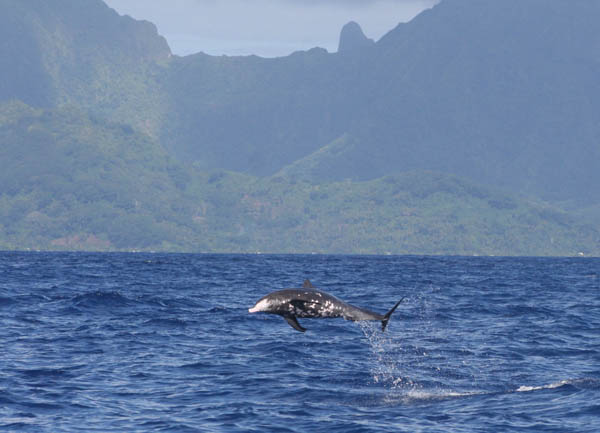 Photo by Renee Albertson
A leaping rough-toothed dolphin.  The white spots on the ventral side shown here are typical of this species. Raiatea is the island in the background.

Today we were again restricted to the west side of Raiatea, but had 2 encounters with rough-toothed dolphins.  The first was within 300 meters of the reef; many of the individuals we recognized from the day before when we encountered them at 3 km offshore. For our second encounter of the day, rough-toothed dolphins were feeding on flying fish. They were very close to shore, in depths as shallow as 5 meters, and were accompanied by a small group of bottlenose dolphins.  We were able to get biopsies and photo IDs from all encounters and both species. 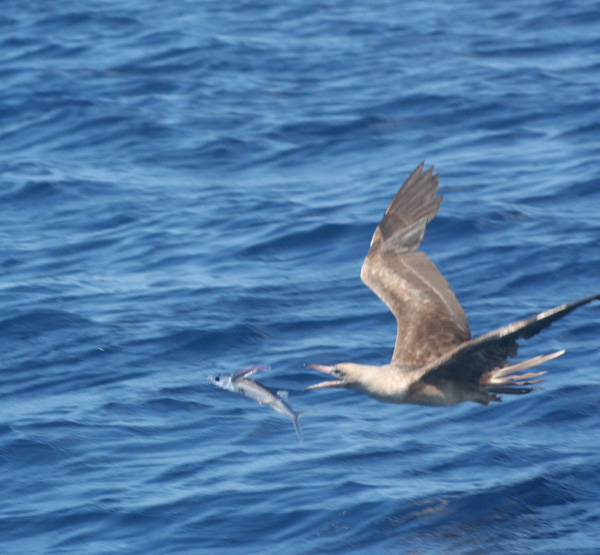 Photo by  Jim Sumich
A red footed booby takes advantage of the flying fish that were being chased to the surface by rough-toothed dolphins. 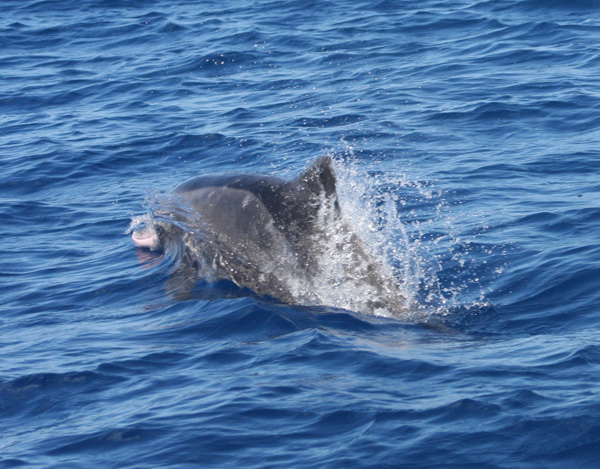 This is our last day on the water. Thanks for your interest in our project.